Disclaimer: This is not so much a review per se but more of a general “Dave Grohl is awesome and we should all worship him” piece.

It’s safe to say Foo Fighters are big. Really big. With their seven albums selling over 11.1 million copies and a reported £225 million in the bank (and that’s just Grohl), they’re not doing too badly. So when a band of that calibre and stature decide to play three intimate (and intimate is an understatement here) gigs it’s pretty special. You could almost go as far as saying once-in-a-lifetime kind of special.

That once-in-a-lifetime opportunity happened this week when Foo Fighters revealed that while in the UK (they’re here to headline the Invictus Games Closing Ceremony on Sunday) they will play a number of tiny gigs under the name of The Holy Shits. The first of which took place at Brighton Concord, they then headed to the capital to play at the House of Vans. Their third and final gig took place on Friday 12 September at the 430 capacity Islington Assembly Hall, which was the gig I somehow managed to get tickets for.

It was a weird feeling of nerves and disbelief that took over waiting in the already sweaty and hot London venue; still not quite believing the luck of ending up here and still not quite believing that the Foo Fighters – sorry, The Holy Shits – were going to play this tiny venue in a matter of moments. The Hall itself can fit 230 people, while upstairs on the balcony there was room for an additional 200 people to be seated.

Waiting in suspense as sound checks went on, we got a glimpse of just who was sitting on the balcony above us. Spotting an iconic bouffant of grey hair, it was only Queen’s Brian May that had arrived. The crowd lapped this up shouting his name, which was returned with a slightly embarrassed but pleased smile. Sitting beside him was none other than Roger Taylor.

So now we’re in a tiny room with Queen waiting for Foo Fighters. Holy Shit. Is this how they came up with the name?

Lights down and on walked Foo Fighters jumping straight into Aurora. Grohl had his back to the audience playing the long intro and then turning, and taking to the mic, he began. Straight away this crowd were singing and that’s the way it stayed for the rest of the evening.

Next, we were treated to All My Life. This sent us into overdrive, exerting the full potential of the spring floor. Part way through the song a ‘Holy Shits’ chant started. A smiling Grohl greeted it with, “Thanks for that, but shut the fuck up I’m not done yet.” He wasn’t. Continuing it was time for another holy shit moment as we watched the pure talent that is Foo Fighters complete All My Life – and by watched, I mean went crazy. 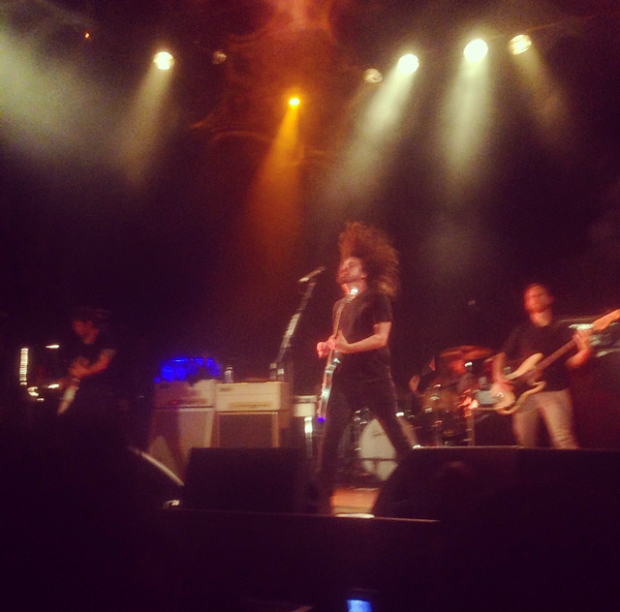 Grohl, dressed in a black tee and black jeans with his trademark long hair left loose, looked nothing but all man. A familiar site looking around the room as the night’s crowd could only be described in one way: a cockfest. Ladies were scarce, there were a few couples but many, many men with unruly hair a little like Grohl’s.

Their set list (which you can listen to below) presented a perfect mixture of old and new from I’ll Stick Around to These Days to The Pretender (which included playing a snippet from Sonic Highways). What’s more, they made sure we could survive the heat of the room. And boy was it hot. If there were a few songs which you needed to go crazy to they were mixed with something slower to keep the balance of rowdy and really fucking rowdy.

Joking about their huge show on Sunday, this spiralled into a pep talk from drummer Taylor Hawkins, which then spiralled into Grohl thinking it would be funny to enjoy an awkward silence because they never get to do that kind of thing anymore.  “Well, that was awkward,” ended Grohl and we were away again.

We then found out that Dave Grohl’s mum was in the front row of the balcony and what followed was a beautiful moment where the 45-year-old musician thanked his mum for raising him while the crowd gave her a raucous applause. Later, he reflected, “You don’t realise how many songs reference your mum until she’s sat in the audience!”

A favourite of mine was the rendition of Skin and Bones. It created a change from their pure rock sound to something with a more gypsy-folk style that was complimented by keyboardist Rami Jaffee who brought out the accordion. It left for some strange sway-dancing from the mainly male crowd.

The only hint that we were watching a band of such status (aside from their incredible talent and complete ease on stage, obviously) came from guitarist Pat Smear who made the affair that bit classier by swigging champagne from the bottle as opposed to the rest of the guys who were on the beer.

Drummer Taylor Hawkins showed off his singing skills when they played Cold Day In The Sun as he took over lead vocals. Although not the happiest of songs, he still maintained his characteristic Cheshire cat grin.

Half joking, Grohl started to introduce the band by saying that you have to be really talented to be in the Foo Fighters and, his jokes aside, it’s true. Foo Fighters are a band who are made of talent. Pure talent and genius. Between them they have well over 100 years’ experience in music and from the days of Nirvana to Them Crooked Vultures – Dave Grohl is one of the greatest musicians of our time. That we all know, and that was there in full, on stage, but what’s more was the fact that despite all those years, all those gigs that they’ve already played, the thing that struck me most about their performance was that you could see they were loving it just as much as the fans that hung onto to every cord, every note and every sound that they made.

“I like to sing this song on my own sometimes to give the guys a break, they’re old you see.” He said with a grin before he started Times Like These to the captive audience who clung onto every word. Pat Smear, Nate Mendel, Chris Shiflett, Taylor Hawkins and Rami Jaffee re-joined for the end of the song and together they went into Best Of You. Their goodbye to Islington.

I left the venue with a sweat-soddened shirt, mascara running down my face, matted hair, stiff legs, a sore back (I was basically broken) and a massive grin on my face.

What can top Foo Fighters playing the most intimate gig and being part of that crowd? I’m racking my brain and nothing’s striking a chord. Best gig of my life? Without a doubt.

For fans who missed them during their UK dates they keep hinting a week-long Wembley residency (Grohl: “Who’s going to see us at Wembley?”) and with the release of their eighth studio album Sonic Highways just around the corner (November) we can bet they’ll be back soon.

A blog by a Yorkshire girl with a passion for writing, life, travel and people. I hope that you find something of interest here. Please feel free to read, comment and share.